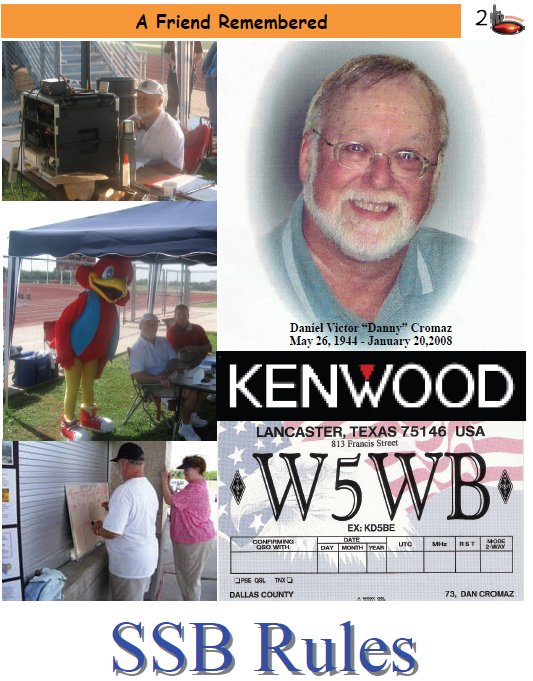 About our Friend Danny W5WB

SWDCARC has recently suffered a loss of one of our own.  Danny Cromaz, W5WB was a key member / leader of us.  My words fail me as I try to encompass what Danny meant to the club and what he meant to us each as a loyal friend.  Danny was my counselor when I was chair of the Field Day for 2006 and 2007.  And what a friend and counselor he was.  Being around Danny meant that one wasn’t too far away from a joke, or a laugh, or kind word of admonition.  It didn’t take long to figure out that when Danny was a bit upset with you, or maybe a position you took, he would only speak louder and smile / laugh stronger (that was the only clue).  We knew him as an active participant in club activities, chairman of some, and a resource of knowledge when we needed help.  No matter whether you were a newbie or an old hat on the repeater, W5WB was there to greet you and speak with you as long as he could.  As a club leader, Danny was one of the most unassuming characters I knew.  No trumpet fanfare, no crashing cymbals, things just happened when Danny was around.

Danny isn’t with us now.  His great legacy has left the SWDCARC wanting.  I really don’t think many of us knew how much Danny did for the club.  That was Danny.  Like I said, no trumpets, no crashing cymbals.  In the midst of our grief at Danny’s passing we found out the depth of his volunteer ship and dedication of time to the club.  He left a big hole behind.  It will take time to heal, missing Danny being around and to fill the void left in our club.  Danny left us a legacy of leadership and volunteer ship. He has set us an example.  To honor his name and his work for the club, it is up to us to use his example, pick up the pieces and move the club forward from here.

Danny was the webmaster for many years.  We have dedicated this site in his memory.  For many of us, he was a wonderful leader and a great friend.

Net every Monday at 8:00pm (except holidays)
Guests are always welcome!